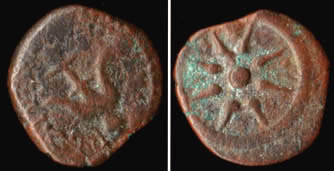 One of my favorite examples to illustrate the importance of literary context for biblical interpretation is the story of the poor widow’s offering. Here’s the story as we find it in the Gospel of Mark:

41 [Jesus] sat down opposite the treasury, and watched the crowd putting money into the treasury. Many rich people put in large sums. 42 A poor widow came and put in two small copper coins, which are worth a penny. 43 Then he called his disciples and said to them, “Truly I tell you, this poor widow has put in more than all those who are contributing to the treasury. 44 For all of them have contributed out of their abundance; but she out of her poverty has put in everything she had, all she had to live on.” (Mark 12:41-44 NRSV)

At first read, this appears to be a straightforward story about generosity, in which Jesus praises a poor woman for giving money to the temple treasury even though she had so little. As the interpretation usually goes, if this woman, who only had a few coins to her name, could be generous enough to give money to support God’s temple in Jerusalem, then you can find it in your heart to part with some of your money to support the church, a charity, or whatever cause is being championed. Is this interpretation of the story wrong? Not exactly. But it is incomplete, because it fails to take into account the literary context of the passage – that is, what comes before and after it.

Reading the text in context

Here’s the story again, but this time I’ve included the three verses that come right before it. As you read it again, think about whether this literary context changes anything about how you understand the story.

38 As [Jesus] taught, he said, “Beware of the scribes, who like to walk around in long robes, and to be greeted with respect in the marketplaces, 39 and to have the best seats in the synagogues and places of honor at banquets! 40 They devour widows’ houses and for the sake of appearance say long prayers. They will receive the greater condemnation.”

41 He sat down opposite the treasury, and watched the crowd putting money into the treasury. Many rich people put in large sums. 42 A poor widow came and put in two small copper coins, which are worth a penny. 43 Then he called his disciples and said to them, “Truly I tell you, this poor widow has put in more than all those who are contributing to the treasury. 44 For all of them have contributed out of their abundance; but she out of her poverty has put in everything she had, all she had to live on.” (Mark 12:38-44 NRSV)

As you can see, the story of the poor widow comes in the context of Jesus’ teaching against certain religious leaders of his day who liked to dress well and be treated with respect as they went about their business of exploiting the poor. Even as they look good saying their long prayers, they “devour widows’ houses” – that is, they exploit the possessions of widows for their own gain, leaving these vulnerable women with nothing. In other words, the wealthy grow more wealthy at the expense of the poor. Jesus has just pointed this out, right before he sees a poor widow putting her last coins into the temple treasury. The ancient world did not have the same kind of separation of church and state that we have today. By putting money in the temple treasury, this woman may indeed be showing her personal devotion to God, but she is also contributing to the same oppressive social and economic system that Jesus had just been condemning. It’s almost like Jesus can see the Jerusalem elite devouring this widow’s “house” right before his very eyes.

Reinterpreting the story in context

If it is the case that Jesus sees this woman becoming even poorer as he watches, it’s worth asking: does Jesus think it’s a good thing that this poor widow gives the temple all the money she has left? According to the common interpretation of the text, Jesus holds up the woman as a model of faith that should be imitated. But notice that, in the story, he never actually says whether he views the woman’s action positively or negatively – he simply points it out to his disciples. What he does say is that she put in “everything she had, all she had to live on.” More literally, the Greek of the original text says that she put in her “whole life.” Considering all we know about Jesus’ views on poverty, it actually doesn’t seem likely that Jesus would see it as a good thing that this woman has nothing left to live on while the elite become richer with the money she gives them.

To see this story as a critique of the religious leaders, it helps to look at the three verses right before it. It becomes even more clear when you read the two verses that come after it. Right after Jesus and the disciples see the woman in the temple, they have this conversation:

As he came out of the temple, one of his disciples said to him, “Look, Teacher, what large stones and what large buildings!” 2 Then Jesus asked him, “Do you see these great buildings? Not one stone will be left here upon another; all will be thrown down.” (Mark 13:1-2 NRSV)

In these verses Jesus relativizes the importance of the very thing that the woman has just given all her money to – the temple. Jesus predicts that it will be torn down (as indeed it will, by the Roman army in the year 70). With these words we realized that it is not just this one woman’s life that is at stake, but actually the whole system is headed for destruction. The way the religious and governmental leaders operate is not sustainable, and all they have built (literally and figuratively) will come crashing down. One can interpret it as God’s judgment or just as the natural course of certain social and economic systems, but either way the widow’s offering was not made to a just cause that is going to last.

In light of this, is Jesus criticizing the woman for giving her last coins to the temple? I think not. We know enough about Jesus’ views on generosity and simple living from elsewhere to assume that he probably did admire this woman’s generosity and her great faith that made her brave enough to give all she had. Nevertheless, even if he wasn’t criticizing her, he was critiquing the system and the people who had reduced her to such a state of poverty and were more than happy to take her last coins from her. The text can be read both as praise for the woman and as a condemnation of corrupt authorities at the same time.

Breaking down a false dichotomy

Sometimes in church circles charity and justice are set in opposition to each other, as though we have to choose between giving our money to the poor and working to dismantle the systems that keep people poor. The former is often championed by more conservative Christians and the latter by more progressive Christians. But just as Jesus both admired the poor widow’s generosity and critiqued the system that perpetuated her poverty, it is possible for us to care both about giving and about social justice at the same time. Jesus admires the woman’s faith, and he also doesn’t want her to stay trapped in the poverty she is living in. He wants a society in which all are cared for, even and especially the most vulnerable. So, that becomes the calling of those of us who claim to follow him – to give generously of our time and money, while also working to dismantle the systems in our own society that lead to poverty – the systems around us that devour people’s “whole lives.”

But even being able to see those systems requires paying attention. I would guess that not many people at the temple that day noticed a poor woman giving a few almost worthless coins. But Jesus saw her because he was paying attention. He brings her from the margins to the center of the story. We, too, need to pay attention if we are going to notice not only the person on the street being passed by, but also social and economic systems that work behind the scenes to perpetuate poverty. It’s easy for many of us to go through life without even noticing the systems that steal life from other people. In addition to being a call to giving and a call to justice work, the story of the poor widow’s offering is also a call to pay attention.

6 thoughts on “A Poor Widow and the False Dichotomy of Charity vs. Justice”