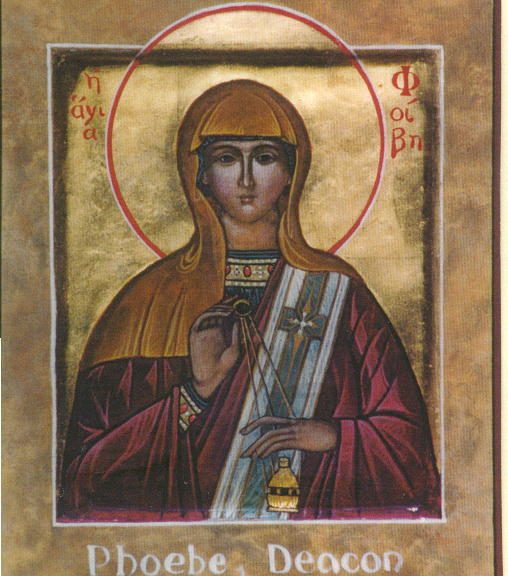 In my last post I wrote about the insight that Romans chapter 16 gives us into the diverse and vibrant community of the early church. If you missed it, you can click here to read it. In this post I’m going to introduce one of the many woman mentioned in Romans 16. Most of the names in this chapter are members of the Roman church that Paul is sending greetings to. Phoebe, however, was not a member of the Roman church but lived in Cenchreae, a port town near the city of Corinth. Corinth was where Paul was staying when he wrote the letter to the Romans.

In the Roman Empire, there was no postal service available for everyone to use. Therefore, if you wanted to send a letter you had to find someone to deliver it for you. Paul regularly dispatched his co-workers for this very purpose: to deliver his letters and to serve as his representatives and the letters’ first interpreters for the communities that received them.

In the case of the letter to the Romans, it was Phoebe who was sent to Rome with Paul’s letter. So Phoebe not only traveled from Corinth in Greece to the city of Rome (no small undertaking in the ancient world!), but she also represented Paul and his gospel message to the Roman Christians. Imagine receiving such a letter and hearing it read aloud for the first time. Members of the Roman community were no doubt full of questions after it was read. Phoebe was the person would could answer their questions and explain further what Paul meant, due to her first hand knowledge of Paul’s message and her experience of serving the gospel alongside him as a co-worker. Phoebe was the first interpreter of Paul’s letter to the Romans.

Travel was difficult in the ancient world compared to today, and it could also be dangerous, due to the risk of robbery, violence, shipwrecks, etc. The availability of places to stay on the road was not guaranteed, and even when present, inns and taverns were often places of ill repute and could also be dangerous. This is why hospitality was so important in ancient culture. The only truly viable option for most travelers was to stay with people they knew, or to rely on the hospitality of strangers. Paul wants to ensure that the Roman Christians will welcome Phoebe when she arrives and provide her a place to stay and whatever she needs while she is there. This is why Paul opens chapter 16 with the following words:

I commend to you our sister Phoebe, a deacon of the church at Cenchreae, 2 so that you may welcome her in the Lord as is fitting for the saints, and help her in whatever she may require from you, for she has been a benefactor of many and of myself as well. (Romans 16:1-2 NRSV)

The word commend could also be translated as recommend, present, or introduce. I like the CEB version, which reads, “I’m introducing our sister Phoebe to you…” These words facilitate her entry into a community where she has never been and may not know anyone. They are intended to ensure that she will be welcomed.

So it is clear what Phoebe did: she traveled to Rome with the letter and represented Paul and his message to those early Christians in Rome. But who was she? What else can we know about her? Of course, there is much we will never know about her, but we will glean all the clues we can from looking more closely at the three words that Paul used to describe her.

Paul regularly referred to his fellow Christ-followers as his brothers and sisters (and as brothers and sisters to one another). The fancy term for this is “fictive kinship,” which simply means regarding as family people who are not actually related by blood or marriage. This was one of the ways that Paul created and strengthened the bonds of community and identity in early Christian groups. They were to think of one another as family. So it is not surprising that he calls Phoebe a sister.

But even though this language is not unusual for Paul, it is very strategic that he specifically chooses to use it here for Phoebe, since he is sending her to a new place and expects her to be welcomed there. Notice that he does not call her my sister, but rather our sister. In other words, Paul expects the Roman Christians to treat Phoebe like their sister, even though they have never met her. It is not only Christians within a particular Christian community who are to regard each other as family, but all Christians everywhere. In Paul’s view, the bonds among Christians cross ethnic and geographic lines. They are to instantly recognize this woman as their sister, thus ensuring she will be provided for in a city new to her.

So the first thing we learn about Phoebe is that, in Paul’s view, she is already connected deeply to the community she is traveling towards. She is part of the family, and so are they.

The next word that Paul uses to describe Phoebe is diakonos. This could be translated into English as servant, deacon, or minister. At its most basic meaning, the word refers to someone who performs some kind of service for another person. But fairly early in the history of the church the word began to be used in a more technical sense for Christian leadership—referring to those who engage in servant leadership within the Christian community. It’s not completely clear how much of this technical meaning the word had acquired at the time that Paul wrote the letter to the Romans, but it is clear that Phoebe is exercising some kind of leadership within the Christian community at Cenchreae. Elsewhere Paul applies the word to himself and to others who engage in the preaching and teaching ministry of the early church (see 1 Cor 3:5; 2 Cor 3:6, 6:4, 11:23; and Phil 1:1 for other examples).

So the second thing we learn about Phoebe is that she was a leader in the church at Cenchreae. She labored within that community and beside Paul in the work of the gospel.

The final word that Paul uses to describe Phoebe is prostatis, which can be translated as patron, benefactor, guardian, protector, sponsor, supporter, or defender. This most likely means that Phoebe was a woman of means and used her wealth to support the Christian movement and assist Paul in his work. Although most women in the ancient world depended on male relatives for support, there were in fact some women who had resources of their own, which they could have acquired through engaging in business or through inheritance. Women of means were crucial to the ministry of the early church. We know of several women who provided spaces in their homes for church gatherings, supported the mission of the church, and provided leadership within their communities (other examples were Lydia, Chloe, Nympha, and Prisca).

This is the only time Paul ever used the word prostatis in any of his letters. (This feminine form of the word is used only here, and Paul never used the masculine equivalent.) Typically, Paul avoided patronage language. He didn’t want to portray some Christians as “above” others. He didn’t want to portray some believers as always beholden to or indebted to other believers. He usually opted instead to portray all believers on a level playing field with each other in relation to Christ as Lord. Phoebe must have provided extraordinary support and leadership to warrant Paul’s description of her as a prostatis to many, and to himself as well.

So the final thing we learn about Phoebe is that she was wealthy and that she used her wealth to serve others and to support, lead, and further the mission of the early church.

Phoebe was clearly a remarkable person, a generous woman, and a skilled leader in her community. She was also courageous to take on the role of traveling to Rome as Paul’s emissary. Paul’s words about her reveal to us 2,000 years later that women were playing crucial roles in the ministry of the early church. Phoebe is one of quite a few women that Paul mentions and commends for their leadership and service. When Paul writes about these women, nothing distinguishes their service from that of the men they worked alongside. They are all co-workers in the gospel.

In my next post I will write about another extraordinary leader in the early church: Prisca, a.k.a. Priscilla. I hope you will join me.