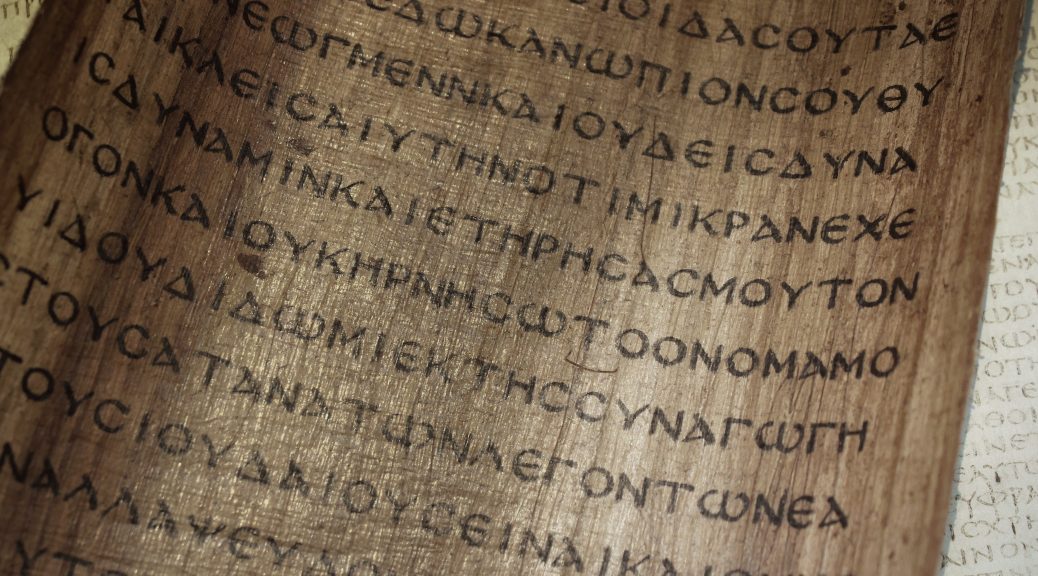 The last stop in our tour of the women of Romans 16 is verse 7:

7 Greet Andronicus and Junia, my relatives who were in prison with me; they are prominent among the apostles, and they were in Christ before I was.

Unfortunately, this intriguing little verse is all the information we have about Andronicus and Junia. They are not mentioned in any other documents we have. Most scholars assume that they were a married couple, and this is probably correct, though it remains an assumption because Paul does not explicitly say so. Many other questions remain as well. In what way is Paul related to them? When and where were they in prison? What qualifications does Paul have in mind when he calls them apostles? Were they originally from Rome or did they immigrate there? What was their role in the Christian community in Rome? None of these questions can be answered with certainty. What we can do is examine a few clues to their identity, and then explore the interesting story of how Bible scholars and church leaders tried to turn the apostle Junia into a man centuries after her life and death.

What we can know about Junia

One thing that we know is that Andronicus and Junia were living in Rome at the time Paul wrote his letter. But they may not have been native to Rome. In fact, it seems unlikely that they were native to Rome considering that Paul says they were Christ-followers before he was. This means they must have become Christians very early in the Christian movement. Some scholars have even hypothesized that they were disciples of Jesus from before his death and resurrection, and later moved to Rome. This is possible, but there is no way to know.

What about their designation as apostles? What does Paul mean by the word? The literal meaning of the word “apostle” is someone who is sent out as a messenger or envoy. In the New Testament the word is used to identify particular believers who are given special callings to go out and proclaim the gospel. Some writers use the term to refer only to the twelve disciples of Jesus designated as his closest followers. Paul, however, uses the term a bit more broadly. For Paul an apostle is someone who has been given a particular calling by God to preach the good news where it has never been preached before, and he also seems to associate the idea of apostleship with those who had witnessed an appearance of the risen Jesus (see 1 Corinthians 9:1 and 15:3-9). Since Paul calls Andronicus and Junia apostles, this probably means that they were Jewish believers in Galilee or Judea who were part of the Christian movement from its earliest beginnings. Their designation as apostles may also indicate that they were the ones who first brought the Christian gospel to Rome. This is speculative, but I believe it is speculation with some merit.

Romans 16:7 is the only place in the New Testament in which a woman is called an apostle. This makes it a pretty big deal. Such a big deal that it is hard for some people to believe. In fact, some later interpreters found it so impossible to believe that Paul would call a woman an apostle that they concluded that this must not actually be what Paul wrote, and they changed the text accordingly.

Unfortunately, the earliest manuscripts of the New Testament were written without accent marks. This means later interpreters have to decide how words should be accented. Usually, proper accenting is obvious and any decisions that have to be made about accenting don’t greatly affect the meaning of the text. In this case however, accenting determines if Junia was a man or a woman. Accented one way, the name would be the feminine Junia. Accented differently, the name would be Junias, a masculine form. However, it is not simply a toss-up, or a situation where each person can just decide which they prefer. There is a whole lot of really good evidence that the word was originally the feminine name Junia.

Here’s some of the evidence:

Given the above evidence, how is it that the name was commonly understood to be masculine during the 20th century?  The first interpreter credited with identifying the name as masculine was Giles of Rome (1243-1316), who referred to the pair as “those honorable men.”  About two centuries later Martin Luther translated the name with a masculine article in his influential German Bible.  Yet, during this time and the next three centuries the name continued to be accented as feminine in Greek New Testaments, and most translations (including King James) interpreted the name as feminine.  The tide would begin to turn in earnest in the late 19th century, and the change to the masculine became established in early 20th century scholarship.  Thus, after almost 1900 years of the name being understood as feminine by most interpreters, early 20th century scholars decided that the name must be masculine.

What justified the change made by those early 20th century scholars? Did they have different evidence than we have today? No, the only reason they made the change to masculine is because they had decided before even looking at the evidence that it is not possible that Paul could have called a woman an apostle, because they did not believe that women can be apostles. They allowed their preconceived notions and prejudices to cloud their ability to read the evidence. Fortunately, after Junia had spent about a century with a made-up man’s name, the most commonly used editions of the Greek New Testament changed her name back to the feminine form in 1998.

Junia’s story is an important one to consider for two reasons. First, it really is significant that Paul called her an apostle. This breaks open our notions of what was possible for women in the early church and further reveals the significant ways that women contributed to the leadership and growth of the church in the first century. Second, her tale is also a cautionary one for scholars and all who read and interpret the Bible. When we read what early 20th century male scholars wrote about interpreting her name, we see otherwise capable and intelligent men profess ideas for which there is no solid foundation, all because of their own cultural biases. Our cultural setting influences our assumptions, and our assumptions influence how we interpret texts and sometimes even what we understand to be in the text itself.  Let all of us who seek to interpret the Bible heed the warning.