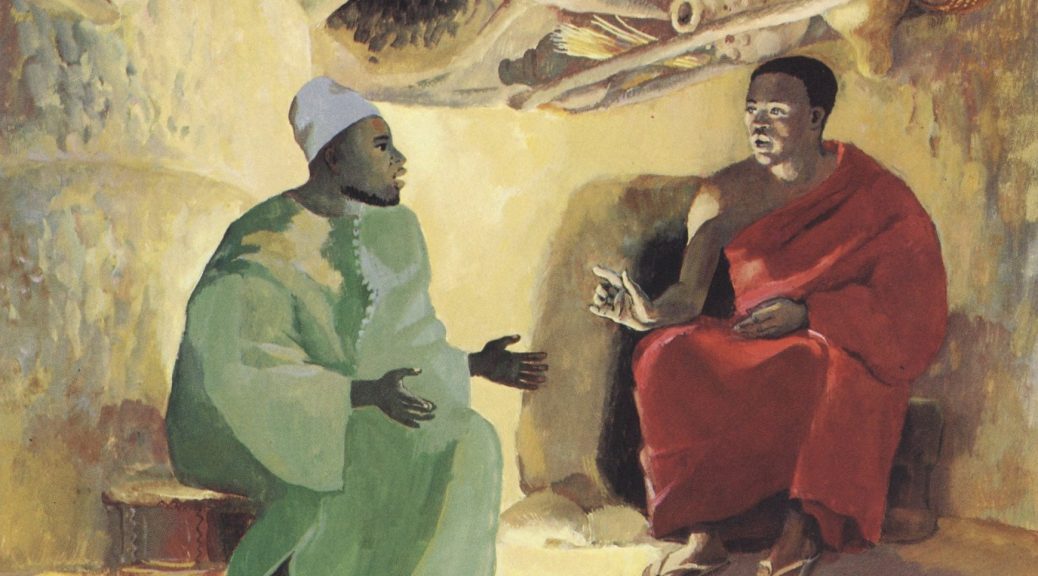 Biblical authors did not write in the style of modern novels. As a result, biblical characters can sometimes seem a bit flat to us, their lives lacking the kind of detail we are used to seeing in stories. But despite this lack of detail and characterization, there are certain Bible characters who seem to leap off the page and express their personalities to us across two thousand years or more. For me, Nicodemus is one of these characters. The Gospel of John tells us the story of Nicodemus, the respected  Pharisee who comes to Jesus at night.

There is much that could be said about Nicodemus’s story in John chapter 3, but for this post we will just note that Nicodemus ends up pretty confused by his conversation with Jesus. This is mostly because Jesus is using words with two meanings, a fact that is not at all clear in the English translation. When you read the story in the original language, Nicodemus doesn’t seem nearly as dumb as he does in the English. Nevertheless, he is confused.

9 Nicodemus said to him, “How can these things be?”

Instead of going over the well-trod territory of Nicodemus’s conversation with Jesus in chapter 3, I’d like to talk about a lesser-known aspect of his story: the fact that chapter 3 is really only the beginning of his story. Did you know that Nicodemus makes an appearance again in chapter 7, and one more time in chapter 19? The progression that Nicodemus goes through in these chapters is what makes his story so interesting to me.

In addition to the fact that Nicodemus was confused by Jesus’ words, it’s also important to note that when Nicodemus comes to see Jesus in chapter 3 he comes at night—that is, under cover of darkness. In the Gospel of John, things often have two levels (a literal level and a spiritual level) and this is true of the darkness in this story.

In the literal sense, as a respected leader it’s likely that Nicodemus didn’t want anyone to know that he was going to see a man perceived as a dangerous trouble maker by Nicodemus’s peers.

Really, to understand why Nicodemus didn’t come to Jesus in the open, in daylight, you only need to look at what happens in the Gospel of John right before this story: Jesus drives out the merchants and money changers from the temple and overturns their tables. This is not exactly the kind of guy a respected leader would want to be associated with. Hence, Nicodemus must have thought it safer to come at night.

But the darkness also has a figurative or spiritual meaning. The author of this Gospel uses light and dark imagery throughout his story. Light symbolizes God’s presence. Those who are in the dark do not know God. So the fact that Nicodemus comes to Jesus in the dark is a signal to us from the author that Nicodemus, although he is open-minded, does not yet understand who Jesus is and is not yet one of those walking “in the light.” Unfortunately, after a brief exchange, Nicodemus fades from the scene while Jesus continues with a monologue, so we aren’t sure what Nicodemus is thinking at the end of his first appearance in the Gospel.

Much is usually made of the fact that Nicodemus just didn’t seem to “get it.” But, today, I would like to make much of the fact that Nicodemus showed up. He didn’t have to take the risks he took. He came in the dark, but at least he came. Nicodemus is a good example for us of not being afraid to show up, even when we don’t have it all figured out. He’s an example of not being afraid to ask questions and thereby reveal to others that we don’t have it all figured out. He teaches us not to be afraid to look for answers to our questions. Answers don’t come to those who think they already know it all. The quest for an answer must begin in uncertainty.

Looking for answers can take you places you never imagined you would go. Where did it take Nicodemus?

Nicodemus may have been confused in chapter 3, but we know he didn’t give up. He allowed himself to be changed by his encounter with Jesus.

In chapter 7, the chief priests and Pharisees send the temple police to arrest Jesus. To their dismay, the police come back without Jesus. When questioned, the police reply that they did not arrest Jesus because, “Never has anyone spoken like this!” Most of the Pharisees are quite upset and berate the temple police for being taken in by Jesus, just as the common people have been. But there is one Pharisee who speaks up with a different viewpoint. Our old friend Nicodemus says to them, “Our law does not judge people without first giving them a hearing to find out what they are doing, does it?”

Perhaps he has not yet become a true disciple, but he finds the courage, in the daylight this time, to speak up for fairness and urge others to keep an open mind about Jesus.

And even this is not the end of Nicodemus’s story.

Near the end of John’s Gospel, after Jesus has died, a man named Joseph of Arimathea, who had been a secret follower of Jesus, goes public and asks Pilate for Jesus’ body in order to bury it. Then we read this:

39 Nicodemus, who had at first come to Jesus by night, also came, bringing a mixture of myrrh and aloes, weighing about a hundred pounds. 40 They took the body of Jesus and wrapped it with the spices in linen cloths, according to the burial custom of the Jews. 41 Now there was a garden in the place where he was crucified, and in the garden there was a new tomb in which no one had ever been laid. 42 And so, because it was the Jewish day of Preparation, and the tomb was nearby, they laid Jesus there.

So Nicodemus comes with Joseph of Arimathea to bury Jesus, bringing an extravagance of myrrh and aloes to anoint the body.

Think of the progression Nicodemus makes through John’s Gospel. He moves from the cover of darkness, to public open-mindedness, and finally to a public expression of love for Jesus.

Nicodemus was one persistent fellow in his quest for the truth. His story shows us that beginning in the dark and in uncertainty is actually the best place to start. From there you can be open to wherever the Spirit might lead you. I’m sure that on that first dark night Nicodemus couldn’t have imagined his encounter with Jesus would end with spices at a tomb. Neither can we know where our questions will lead us. But we can be certain that opening ourselves up to new ideas and new possibilities is not a slippery slope; it’s an adventure, and one that the Spirit leads us on.

In our world today it is easy to get overwhelmed by so much information from so many different sources, some of it reliable, some of it propaganda, some of it “alternative facts.”  In this context, we can all the more appreciate Nicodemus’s persistence in seeking answers to his questions and not resting until he arrived at the truth. Though, of course, even the spices at the tomb were not Nicodemus’s final destination in his search for truth. We don’t know where his spiritual journey took him after that. But we know it didn’t end there. For, during our lifetimes, none of us arrive at so great an understanding of truth that our search for answers can stop. The important thing is to keep searching, just like Nicodemus did.

Picture at the top of this post: JESUS MAFA. Nicodemus, from Art in the Christian Tradition, a project of the Vanderbilt Divinity Library, Nashville, TN. http://diglib.library.vanderbilt.edu/act-imagelink.pl?RC=48385

19 thoughts on “The Story of Nicodemus”